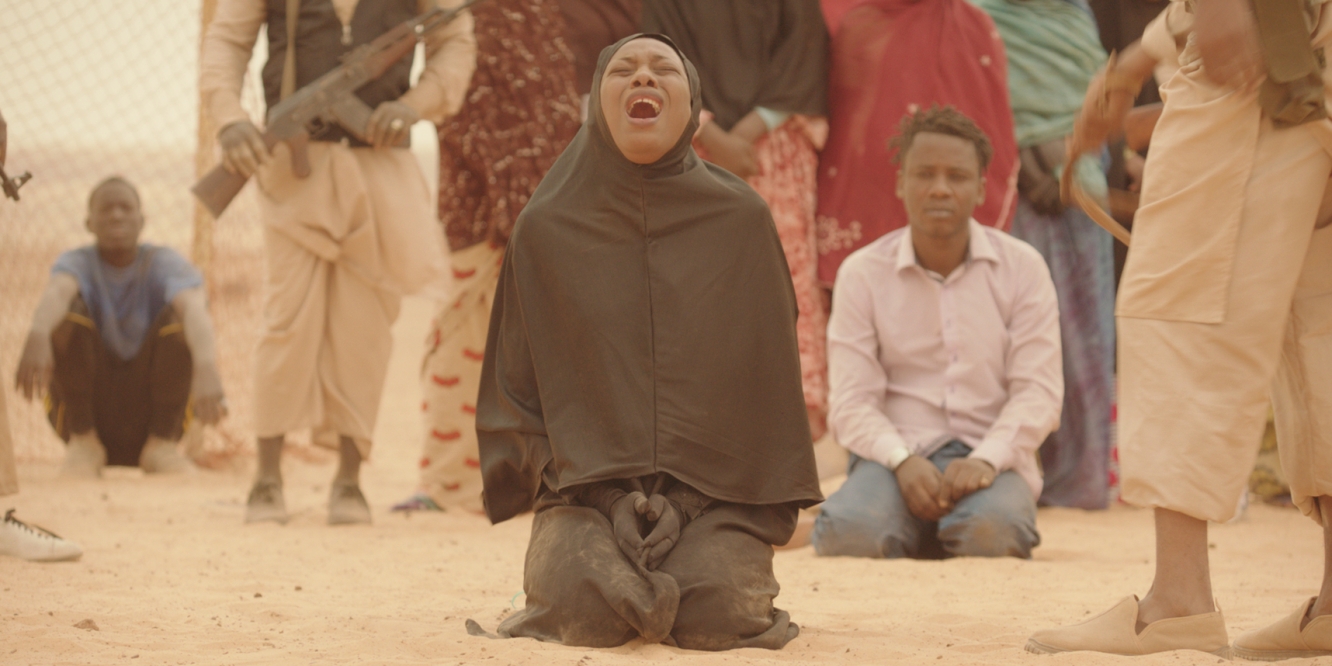 This is an unpublished essay completed for my BA Film Studies course a little under a year and a half ago. The piece is a little less polished than my recent work, but I hope is an interesting read none the less.

Timbuktu is a 2014 film directed by Abderrahmane Sissako. The film follows the occupation of Timbuktu by a jihadist group based on Ansar Dine. During the film, an unmarried couple is stoned to death for engaging in an intimate relationship. This sequence is juxtaposed with an almost spiritual moment of awakening by one of the main jihadist group members, Abdelkrim. The sequence in question highlights several important moral issues posed by the film, including character morality in fictional cinema, and the conflicting contrasts between Kantian and Aristotelian ethics. The radical Islamist group is a brutal and violent structure as a whole; Timbuktu, and this scene in particular, attempts to pick apart the radical ideology within the group itself from the individualist behavior of the group’s members. Thus, blurring the line of character morality, and creating an unstable moral code within the film. Where is the line between vice and virtue in Timbuktu? How do the ethics of Kant apply to this scene? And, most importantly, how does the film question the idea of a morally complete character?

In “Visions of Virtue in Popular Film” Joseph Kupfer suggests, “parallels in plot, theme, and characterization should broaden our understanding of why the morally good person is uniquely equipped to overcome both natural danger and human vice.” (Kupfer, 1999, p.187) While this concept proves to be true more often than not for most Hollywood films, there are examples from films that question the very idea of a ‘morally good’ character. Take our scene from Timbuktu; the scene opens with the couple accused of adultery being buried in sand. The jihadists stand in an imposing circle around the couple as they dust sand over their shoulders, leaving their heads exposed from the earth. As the scene progresses, we quickly learn of Abdelkrim’s absence, who is instead, alone with Zabou, an actively stern protester against the jihadist rule. The very act of being with Zabou while the stoning takes place is an ethically complex one. If we are to assume that Abdelkrim is a character of vice within the story, then what does it mean that he escapes the stoning to be alone with a virtuous character? This act seems to be ethical ebb and flow since Abdelkrim himself is a symbolic figure of the radical Islamist group, yet he engages with the morally ‘good’, doing so by avoiding the group’s human vice while still remaining within its structure. Kupfer goes on to describe morally virtuous characters as “well-rounded characters (who) act for the safety of other citizens, and they themselves function as model citizens.” (Kupfer, 1999, p.188) Abdelkrim does not embody the ethics of a morally complete character because of his status within the oppressive jihadist group. This stops the viewer from identifying ethically with Abdelkrim, but does not result in his alienation from the viewer because of the distance he draws from his fellow jihadists, meaning his moral status within the film is a complex and diverse one. The scene attempts to blur the lines of what it means to be a “good” or “bad” person, and suggests in terms of Aristotelian ethics that moral code is determined by any given individual’s unique perception, perspective and status. Kupfer draws upon Aristotelian virtue ethics, highlighting an importance for the virtues of fictional film characters to be reflected in part by the self. “An important dimension of self-knowledge is self-awareness: the transparency of the individual to him- or herself.” (Kupfer, 1999, p.189) Abdelkrim’s individual circumstance may be seen as one of self-deception, he strives for moral goodness, but does so while allowing brutality and injustice to continue around him. Abdelkrim does not directly engage in the stoning of the couple, but is nevertheless morally and spiritually affected by its ethical impact.

We witness the stoning of the couple from a wide-angle shot looking down at the scene; this emphasizes the situation as not only a public shaming, but also as a warning to any passers-by of the consequences for such acts. The stoning is open, a staged event that holds no secrecy. The couple is silent and restless; they hold no emotion, instead reflecting an emotional blankness that expresses an almost accepting attitude towards their fate. They expose from the ground, their heads as symbols of birth and creation as their root bodies burrow hidden beneath the earth. Not only does the scene resemble birth, but too, a funeral; the townspeople gather to witness the death of buried human beings, only this couple has been buried before death, and not after. We see a close-up of the buried woman with her head dropped, when suddenly, a rock penetrates the edges of the screen, disrupting its silence, before violently bouncing off her head. A few seconds later, we cut to Abdelkrim as he meets with Zabou. To contrast, this scene is held in secrecy, a small and intimate event that explodes with spiritual emotion and expression. Abdelkrim begins to dance rhythmically, yet he seems to be ethically affected by the stoning of the couple, regardless of not inhabiting the same ethical space. He too mixes his body within the earth; his hands and feet plunge beneath the sand, echoing the positions of restraint held by the couple during the same moments. The scene ethically connects both Abdelkrim and the couple; they have each broken the laws imposed by the extreme Islamists, yet while the couple is killed for their actions, Abdelkrim, because of the position he holds, is communally excused and repented. The scene highlights the advantages and shortfalls of an ethical code such as the one presented by Immanuel Kant. Wanda Teays explains that, “for Kant, rational adults are moral agents and their intentions and moral obligations drive their ethical decision-making.” (Teays, 2012, p.169) Abdelkrim’s moral obligations see him avoid the stoning, but this does not remove his responsibility for the murder of the couple. Abdelkrim’s humanity sees him and often the other jihadists, at times, reflect a somewhat moral persona. For example, at one point, some of the group’s members discuss football, before then banning a local football match. This could be viewed as an example of the film’s characters dismissing Kant’s concept of ‘The Categorical Imperative”, which Teays describes as a moral agent following “the moral option that (they) would want every rational person to follow.” (Teays, 2012, p.169-170) As individual moral agents, the group’s members are often shown to bear humanity in reflecting a highly intelligent and rational attitude. But yet, as a unit, these individual moral obligations are suppressed in order to further the interests of the group’s wider unethical intentions.

Both Kupfer and Teays overlook the importance of film form when engaging with character morality. For example, the tight close-ups that capture Abdelkrim as he dances form an ethical relationship between him and the couple. Abdelkrim is hardly captured by the camera as a whole body; instead, he is segmented, cut into individual body fragments as he often leaps in and out of the camera’s gaze. This forms an ethical connection to the couple via aesthetics since they too are segmented from the head down, only not by the camera, but as a result of the force and brutality of the jihadists. Another connection via film form is present within shot duration; both ethical spaces are captured by several long shots. Towards the end of the scene, an observant camera lingers upon a harrowing stare on the couple for around twelve seconds as they lie dead in the sand, as though the camera itself could not bear to witness the stoning in its entirety, yet cannot help but gaze upon the sadness of its aftermath. During the most brutal moments of stoning, the camera’s gaze instead chooses to visually prioritize Abdelkrim’s dance. But while the dance is ‘visually’ prioritized in the film, the death of the couple is ‘ethically’ prioritized, since the dance seems to reflect a sense of inner guilt or turmoil on the part of Abdelkrim’s conscience. This is in turn expressed by the ways in which the two events are visually connected. The aesthetic of the sequence attempts to blend two separate ethical spaces in order to account for the ways in which each event identifies with the moral experience of the other, while in turn, allowing the film’s audience to draw a universal connection between the events. Even the way in which Abdelkrim throws a handful of sand behind him during the climax of the sequence is emblematic of this, for the next shot shows the now dead couple as sand mists over their faces from the edge of the frame, as though Abdelkrim’s sand had penetrated his ethical space, and subsequently entered theirs. Abdelkrim does not have to act unethically directly in order to bear responsibility for the death of the couple, just as the western audience viewing the film cannot escape its responsibility towards the impoverished events presented within Timbuktu. The sequence highlights an ever- continuing stream of blame and guilt that is able to transcend physical space, depicting the ways in which moral agents are ethically obligated not only by intentionally direct acts, but also by unintentionally indirect behaviors such as greed, ignorance, and self-preservation.

The sequence uses a complex moral framework within a purposefully designed filmic form to highlight Abdelkrim as a questionable moral character, while at the same time not rooting him as the source of brutality, but as one component in a long line of global action and non-action regarding his circumstance. Therefore, not entirely placing blame onto the depiction of the jihadists within the film, but using them as an example of a failed ‘Categorical Imperative’, a filmic example of moral corruption spreading from one source of ethical space to affect another.