For a whole generation Audrey Hepburn helped define what it was to be a single girl in the city, until the notion got redefined, first by Diane Keaton, then by Sarah Jessica Parker.

It would make for a curious sociological study to discover just how many small-town girls moved to the big city because of Audrey Hepburn in “Breakfast at Tiffany’s”. And would that number be higher or lower had it been Marilyn Monroe in the role? When Truman Capote wrote the original novella, his conception of Holly Golightly – the flighty, vulnerable, tragic girl who gets paid $50 to go to the powder room – was closer to Monroe than anything else, and Monroe desperately wanted to play the part.

Monroe would have made an interesting choice, I think, and it certainly would have made for a more damaged Holly (and probably closer to Sugar in “Some Like It Hot”). And I think Monroe would have brought a harsher reality to the reveal of Holly’s back-story. Now, though, it is simply impossible to imagine anyone other than Hepburn in the iconic role. In fact, although the studio wanted her for the part, they assumed she wouldn’t want to play a call-girl, no matter how divine the gowns she wore. In real life Hepburn was far earthier than people realised, and although she is wonderful in it, it is a great shame that she didn’t get to play the role as it was originally written.

I think “Breakfast at Tiffany’s” is a movie that bumps up against greatness without ever fully achieving it. It’s too sentimental for its subject matter. It wants it both ways, cynical and romantic. It wants big-city romance and the security of small-town values. It’s also a little too clean. Was New York really like this in the early 1960s?

But it has many flaws, not the least of which is George Peppard as Paul. He is handsome in a solid mid-western sort of way, handsome enough to be a gigolo and a kept man (by Patricia Neal), but at no point do I sense any chemistry between him and Hepburn. Perhaps he is simply overcome by her sheer kookiness and odd mix of innocence and practicality. He is … solid, I suppose. 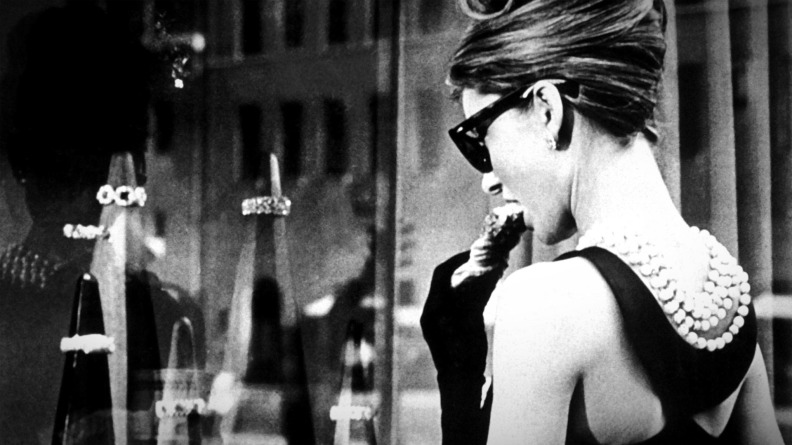 Paul’s a struggling writer and a romantic fool. He’s been living in Rome – surely any affairs he had there would have ended in tears and histrionics, so you think he’d be prepared for what’s to come. Knowing that his character has been in Rome simply invites the viewer to wonder why they couldn’t get Gregory Peck for the part. He and Hepburn had such a brilliant time there in “Roman Holiday”. In fact, Peppard wasn’t anybody’s first choice for the role, and even though Edwards spoke fondly of him, apparently his acting style was a little too method for Hepburn (they got on, but rarely socialised during the shoot). He has much better chemistry with Neal (they were friends and had acted together on stage).

The film’s other major drawback is Mickey Rooney as the Japanese caricature, Mr. Yunioshi, the photographer who lives upstairs. With cropped hair, thick glasses, buck teeth, and a horrendous accent, he gives a wildly over the top and offensive performance, and thankfully is only in a few scenes.

It does have some wonderful moments, though. The opening on a deserted Fifth Avenue at dawn as Hepburn in an evening dress has coffee and a croissant standing at the Tiffany’s window. Martin Balsam as a Hollywood agent (“Fred baby!”) The madcap party scene (a piece of slapstick that has seldom been surpassed, even though its director Blake Edwards tried many times for the rest of his career). Buddy Ebsen’s appearance as Doc, his bright blue eyes conveying both love and pain. John McGiver’s brilliant turn as the Tiffany’s manager. Henry Mancini’s score and his Oscar-winning song “Moon River”. And the cat, of course. (in fact, the filmmakers used nine cats).

And of course, it does have Audrey Hepburn, and if you’re the sort of man who needs an escort, then you could do far, far worse than to hire her. She wears beautiful gowns by Givenchy and Edith Head, and I don’t know if any other woman could quite pull off the hats she wears; she peppers her conversation with French; she can wear a cheap novelty mask and still be sexy; she has what has to be the longest, most elegant cigarette holder in the world. Many actresses and many movie characters have attempted to replicate all or part of the essence of Hepburn/Holly: there’s a little bit of her – not much, but a little bit – in Diane Keaton in “Annie Hall”; there’s a lot more of her – with a more tragic and harder edge – in both Maureen Lipman in “Educating Rita” and Christine Hendricks in “Mad Men”.

Have you seen Breakfast at Tiffany’s? What did you think? Please tell us your thoughts here at A World Of Film. Also, if you are interested in writing for us, send a message and an example of your writing to aworldoffilm@outlook.com