The 2009 directorial debut of Drew Barrymore – Whip It – is arguably the ultimate feminist movie. While that may seem to be a fairly bold statement, it is absolutely the case that this film embodies everything that representation of women in media should be striving for.

Whip It is written by Shauna Cross, based on her own novel ‘Derby Girl’. Cross is a former Roller Derby athlete herself, having skated with the TXRD Lonestar Rollergirls league, and later, the Los Angeles Derby Dolls. The script benefits greatly from her personal experience – providing a level of detail around the world of Roller Derby that is at once immersive, and inclusive, setting the tone for the film as a whole.

Essentially a coming-of-age tale, this is the story of Texan teenager Bliss Cavender (Ellen Page), who secretly joins a Roller Derby team and discovers herself, despite staunch opposition from those around her. In her daily life, she is constantly at odds with her mother, Brooke (Marcia Gay Harden), who tries to re-capture her own youth and manufacture some social relevance by shoe-horning Bliss into the role of pageant-winning girly-girl. Bliss is resistant, reluctant and, ultimately, rebellious as she casts about – desperately seeking her own path.

A chance encounter with a trio of roller girls, leads Bliss to her first experience watching a live Derby, and solidifies her status as a fan. An encounter with Hurl Scouts team player Maggie Mayhem (Kristen Wiig) leads her to lie about her age and try-out for the team. Her natural talent and hard-work lead to her selection.

What follows is a portrayal of a teenager growing into an adult that is so beautiful and pitch-perfect, that it can be applied to any stage in life. As Bliss (known in Derby as Babe Ruthless) progresses and improves her Roller Derby skills – helping the Hurl Scouts move up the league – the dynamics of the existing relationships in her life change as she adds new ones into the mix. 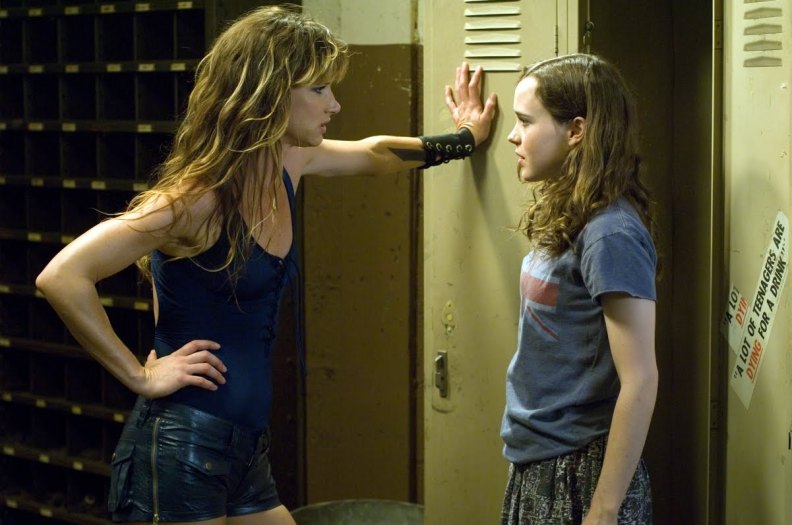 At the beginning of the film, the closeness between Bliss and her best friend Pash (Alia Shawkat) is essentially her comfort zone. But, as these two teens clash over mistakes and discover they are growing apart, their friendship becomes distant and, ultimately falls by the wayside, as the trappings of adulthood crowd in. Bliss develops a strong bond with team-mate Maggie Mayhem who, as an older, more experienced voice, holds great influence over the young and impressionable Rollergirl. At the same time, a grudging respect eventually evolves between Bliss and Iron Maven (Juliette Lewis) – the Captain of rival team, the Holy Rollers, after a protracted period of intense conflict.

The duration of the film also charts the course of the first real romantic relationship for Bliss. Meeting musician Oliver soon after her first introduction to the world of Roller Derby, we watch the young woman discover a sense of connection with him, fall for him, feel betrayed by him, and walk away from him.  The minutiae of the break-up is almost irrelevant – it is borne of her realisation that her own ambition should not be expected to automatically play second fiddle to his, just because he is male. This is a realisation that cuts right to the heart of her relationship with her mother, who also wishes to de-prioritise her daughter’s dreams for the benefit of her own. But, for Bliss, her mother also stands as a cautionary tale, playing out the constant, low-level dissatisfaction of a life not fully lived.

The beauty of Whip It can be found in these relationships – all of which are rich, complex and well-formed. Throughout this network of distinct personalities, all but two characters have an agenda. Pash disapproves of her involvement in Roller Derby because it is a solo interest outside of their friendship. Oliver is only interested in his own needs. Iron Maven sets out to destroy Bliss, feeling intense jealousy of her youth and potential, while Bliss’ mother – feeling the same – seeks to manipulate her to her own ends. It is only her seemingly ineffectual father, Earl, and Maggie Mayhem that truly offer Bliss unconditional acceptance. The result is the timeless story of an emerging voice gradually working to be heard above noise that would otherwise drown it out.

This is a trope that has been rehashed in many forms over many years, but Whip It provides a fresh experience. Beyond the excellent script, the fantastic performances, the brilliant soundtrack and the incredible direction, this film demonstrates how to make the ultimate feminist movie for one simple reason – it could just as easily be about men. If feminism is a movement in support of equal rights for women, then Whip It is the example all filmmakers should follow. This is a film about people, who happen to be women. As opposed to most depictions of women in film – where the women sit around fretting about their relationships, change their lives to accommodate others, and obsess over their weight/clothes/hair/nails/shoes – this is a film where the women are human beings, with all the depth and complexity that goes along with it. If you took this film and made it about male Roller Derby teams (for, yes, they do exist), you would need only change the costumes and names. This film is not a ‘chick flick’ – it is almost genderless.

It is sad to think that the very thing that makes Whip It so extraordinary is also the thing that made it a commercial damp-squib at the box office – making only $17 million on a $15 million budget. The fact that the film includes women in roles outside of the expected narrative for female characters should have been cause for celebration, but was instead a clear message that cinema audiences are not ready to accept gender equality in their movies.

The women in this film are not defined by their relationship to a man, with the exception of Bliss’ mother, who is deeply unhappy. That is the message of the film. When Bliss first approaches Maggie Mayhem at a merchandise stand after watching her compete in a Derby, her eyes are wide and filled with awe. She breathlessly explains that the Hurl Scouts are her new heroes. Maggie Mayhem smiles, and shrugs as if it’s nothing.

“Put some skates on. Be your own hero.”

Have you seen Whip It? What did you think? Please tell us your thoughts here at A World Of Film. Also, if you are interested in writing for us, send a message and an example of your writing to aworldoffilm@outlook.com