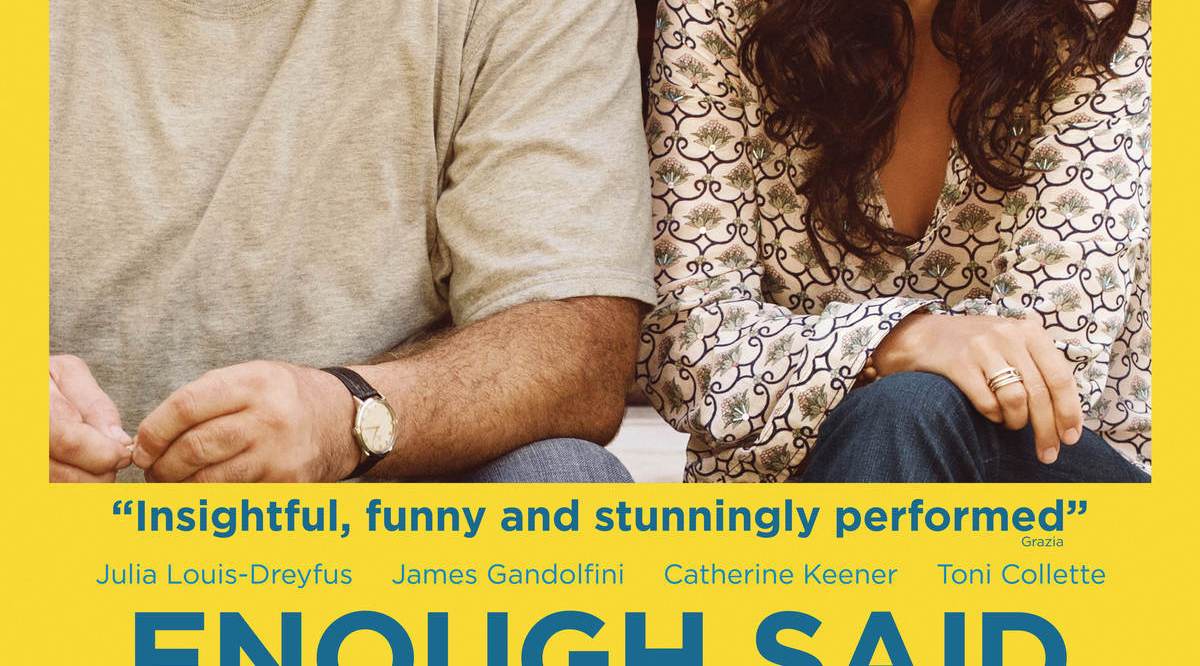 Originally Posted at betweenframes.net. Come check out other reviews written by Mikhail Karadimov. 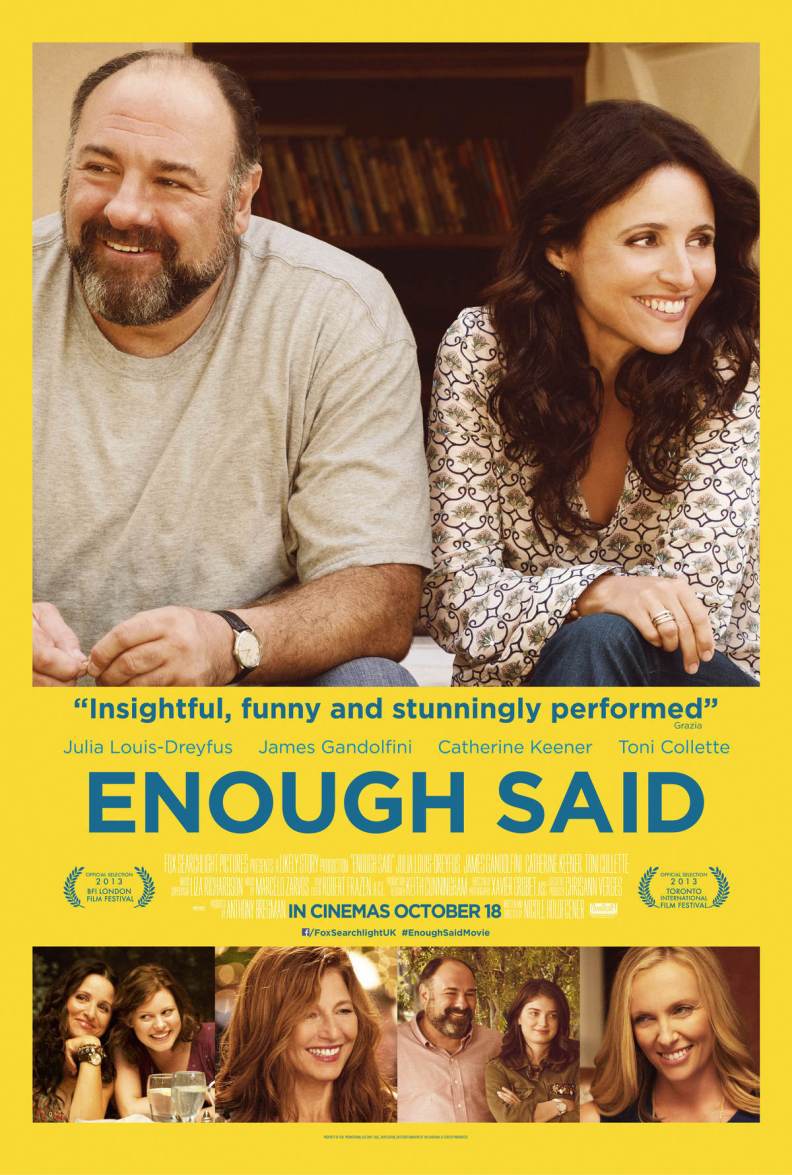 It’s odd to see the late-great James Gandolfini’s large, meaty hands—so endearingly referred to as “paddles” by Julie Luis-Dreyfus’s small and ferrety masseuse Eva— softened by cutting lemons, pulling grass, serving pasta, doing everything but wrapping around someone’s throat and snuffing the life out of them. They’ve softened from mallets to mittens. So have his eyes. His eyelids hang heavy and drowsed, like a bear that’s been tranquilized—or rather, like a divorcee that’s been beaten into submission by his poet of an ex-wife. In one of his final roles, Gandolfini plays a big teddy bear of a man named Albert, a single middle-aged father who works as an affable TV archivist that thinks modern-day programming has gone to the dogs.

Ask him what aired Thursday nights during the Fall of ’77 and he’s likely to answer you with pinpoint accuracy. The man harks back to an older time—an older time of TV at least, when characters were as kind as they appeared, as honorable, as funny and quick-witted. But also, unorganized and sloppy. However, he isn’t at all demanding or overbearing, like Archie Bunker. But he is big, fat, and bald.

And he has presence. Always has.

Gandolfini’s is a kind and deep performance, with wells of pain. What’s most impressive about the performance is how he caps those wells for the big moments. You can feel it swelling underneath, but it never breaks the surface with anything more than intimation. He needles it out just enough to let Eva—and us—know that she’s fucked up, but not enough to mar his integrity. All it takes is a few passing words, a melancholic droop of the eyes, and a sigh so heavy, so cumbersome, you know he’s already exhausted with the thought of having to start from scratch again—romantically-speaking. As Albert says after catching Eva hobnobbing with his ex-wife Marianne (Catherine Keener), who Eva has—without Albert’s knowledge—been pumping for information about Albert’s foibles, “You broke my heart. And I’m too old for that shit.” 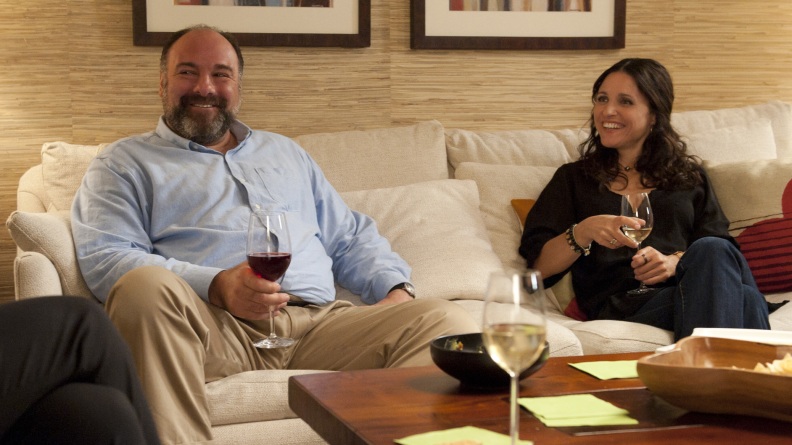 It might seem that I’m talking up the performance greater than it actually is out of some kind of posthumous respect for Gandolfini. But I’m not. This is a sober look at what’s easily one of his greatest performances, even rivaling his Tony Soprano character, mainly because it’s so different, less threatening, less larger-than-life, less cartoonish even. It’s a restrained performance that relies heavily on a kind of verbal dexterity I wasn’t aware he had. I knew that Gandolfini could play comic characters, but they tended toward the broad and oafish. Tony Soprano, or even his Mickey character from Killing Them Softly, were funny in the same way that Homer Simpson is funny. They’re unaware of their comicalness. They’re fools. Here, Gandolfini finally gets to play someone who is funny, who knows he’s funny. A man who’s funny and decent, and holds fast to his integrity. It’s a delight to behold.

It doesn’t hurt that he’s been provided with such an enchanting script. Writer/director Nicole Holofcenter, known for her tightly conceived character pieces about the tiptoe intrusion of other people’s personal boundaries (Please Give and the superb Friends with Money), isn’t the flashiest of directors. For the most part she just lets the camera lie there. The shots are static and traditional in their arrangement. 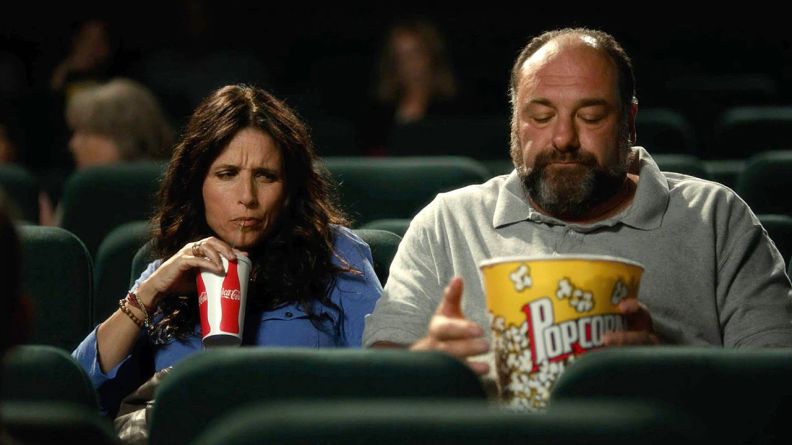 Much of what she throws up there on the screen you’ve seen hundreds of times before in some shit-tastic Katherine Heigel movie. But none of that matters when your dialogue’s so highly charged with screwball kinetics. It clips and it tickles. I’m hard pressed to remember the last time I laughed so much without having to hear about dicks and masturbation ad nauseam. Not that there’s anything wrong with that. Half the fun is watching Luis-Dreyfus and Gandolfini firing back and forth like a comedy fusillade duo. While out on their first date at a hip-chic Asian fusion restaurant, the restaurant’s music suddenly pumps up high and blots out any chance for Eva and Albert to hear each other. Eva asks Albert, “Did they just turn the music louder?” Albert quips back, “No, I think you just got older.”

What’s most fascinating about Holofcenter’s script is its almost fascist adherence to structure. It’s all so visible. The subplots, the best friend character, the third-act turn, etc. It’s the strength of the dialogue and characterizations that you never feel the need to admonish the film for its straight-laced rigor. The film unfolds unsurprisingly, especially in its resolve, but like David O. Russell’s script for Silver Linings Playbook the year before it, you don’t care that you’re travelling from point A to point B to point C, as opposed to F to Z to L. That’s what Europeans are for. What you care about is how you journey in between. It’s the idiot’s rom-coms with the Katherine Heigels and Ashton Kutchers of the world that beeline it from point to point. Both Holofcenter and Russell prefer to zigzag—they dance, meringue, cha-cha-cha all about. That’s what makes their movies so fun and exhilarating. Their movies are predictable. Yet they’re not. 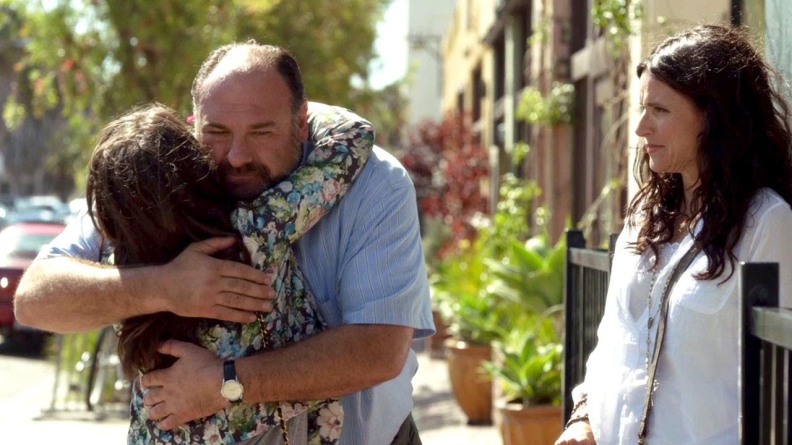 Holofcenter has a thing for shoving her characters’ noses where they don’t belong. Or rather, she likes it when people exist in other people’s existences without permission. For instance, her Friends with Money heroine Olivia (Jennifer Aniston, in what’s easily her finest performance) is a maid-for-hire who skirts the bounds of ethics when she allows one of her boy-toy flings to visit her at a client’s house to watch her clean in a licentiously-cut French maid’s outfit. In Please Give, Kate (Keener, again) earns a living by buying and selling other people’s dead parents’ possessions. Her latest client—potential client, alive and ticking—lives next door in an apartment conveniently close enough to invade and assess. And in Enough Said, Luis-Dreyfus plays Eva, a masseuse who visits her patients’ homes in order to dig her fingers as deep as she can into the folds of their skin and muscle.

The ultimate invasion: a bodily invasion. She eventually learns, through happenstance, that her newest patient, Marianne, is Albert’s ex-wife—a contrivance of misunderstanding that you can’t help but forgive given the movie’s old school sitcom roots—sitcoms being something Holofcenter harbors tons of affection for. Eva uses this knowledge to then tease out of Marianne all the irritating problems that led to her and Albert’s marital demise. Needless to say, Eva’s sense of boundaries—as is the case with most Holofcenter heroines—is whacked as all get out. The compulsion to rearrange someone else’s life is so strong in Eva that she hardly ever pauses to consider whether maybe it’s her own life she should rearrange first. 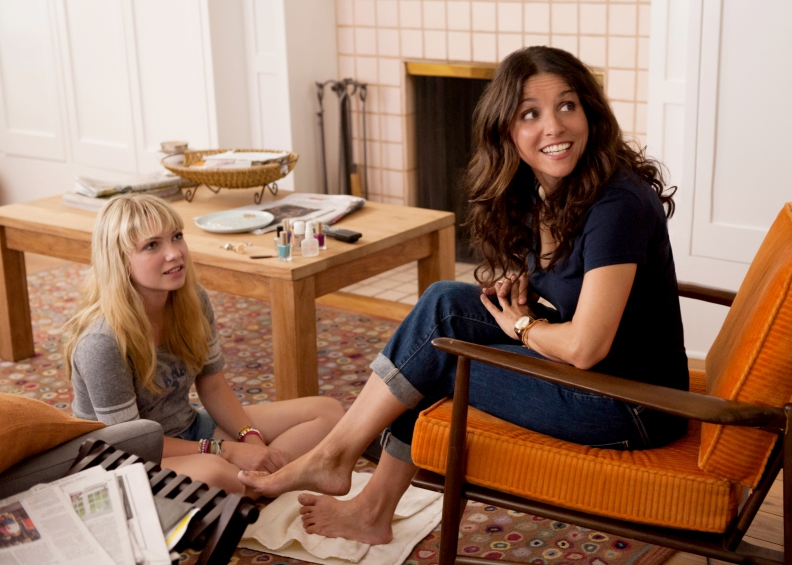 The best you can do is to understand yourself as much as you can. Can you understand yourself completely or perfectly? Fuck no. So why should you ever attempt to completely understand someone else? Why should you try to change someone else? You shouldn’t. Nor should Eva. What trips up most Holofcenter women are their assumptions. Olivia assumes money solves all her friends’ problems. Kate assumes that everyone needs saving. And Eva assumes that her new poet friend is the be-all, end-all of relationship wisdom. Their assumptions give them false license to plunge into other people’s psyches for self-serving tinkering. This line of logic clouds Eva’s judgment so much that she doesn’t even realize how inappropriately co-dependent her relationship with her daughter’s friend Chloe (Tavi Gevinson) has grown—to the point where Eva asks Chloe if she would like to use her daughter’s room as a getaway once her daughter moves out for college. 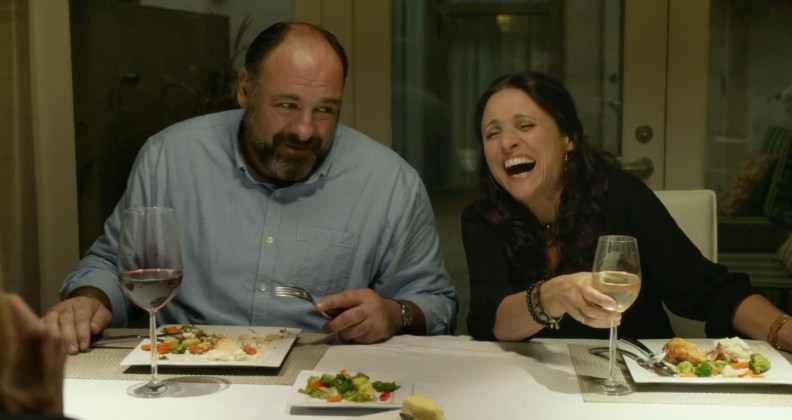 Even though the script’s structure is of a ho-hum predictability, the relationships and interplay between Holofcenter’s characters are anything but. They’re tricky and tangled. It’s a careful hand that wrote this script. Holofcenter is one of Hollywood’s greatest unsung screenwriters, and it’s a damn shame. She’s one of those filmmakers I can’t wait to hear from every couple of years. Like Richard Linklater (the Before trilogy, Waking Life, Dazed & Confused), Holofcenter is a simple director, visually unspectacular with the camera, never drawing attention to the cuts or the style, but strong with a pen.

When characters are this rich, there’s no need for the swoops, dolly slides, fades, the meticulous compositions that speak to some higher cinematic voodoo. All you need to do is provide enough frame for your actors to breathe. And she does that. Thanks to Holofcenter we were lucky enough to see the full breadth of Gandolfini’s range one more time. And what range it was: Truly awesome.

Originally Posted at betweenframes.net. Come check out other reviews written by Mikhail Karadimov.

Agree with the themes and ideas discussed in this post? Please let us know your thoughts here at A World of Film. Also, if you are interested in writing for us, send a message and an example of your writing to aworldoffilm@outlook.com