In France of the late 19th century, the wife of a wealthy general, the Countess Louise, sells the earrings her husband gave her on their wedding day to pay off debts; she claims to have lost them. Her husband quickly learns of the deceit, which is the beginning of many tragic misunderstandings, all involving the earrings, the general, the countess, & her new lover, the Italian Baron Donati.

If anyone reading this is a fan of Max Ophüls, you will know that when it comes to amazing, smooth, influential camera movement and use of long takes, there is no better director. His work has influenced many modern directors including Paul Thomas Anderson, who also works with long takes and vivid camera movement. Ophüls is largely unknown outside film communities, however he made a handful of masterpieces including “Lola Montes”, “Le Plaisir” and the film voted joint 93rd for the best film ever made “(The Earrings of) Madame de…”

The film is laced with Ophüls trademark style. Its imagery is a crisp Black and White canvas baked in a classical Hollywood feel. Its lighting is romantic as with many of Ophüls other films. The dress code is very traditional and its characters are wealthy and conservative. These all sound like the ingredients of a golden age film that might be more concerned about its script than its visuals and tone – but this is Ophüls we are talking about. The camera in the film seems to flow with the characters, whether it is as they dance, as they walk down a staircase or as they exit a car, we are constantly being treated with a wonderfully shot camera motion. The style of a film like this is attempted all the time by contemporary filmmakers, none of which capture the same tone as Ophüls did here. He knew how to use his style in such a way that it did not seem pretentious or over-enthusiastic. Something that still captures the feel and beauty of classical cinema but at the same time manages to be something entirely different. 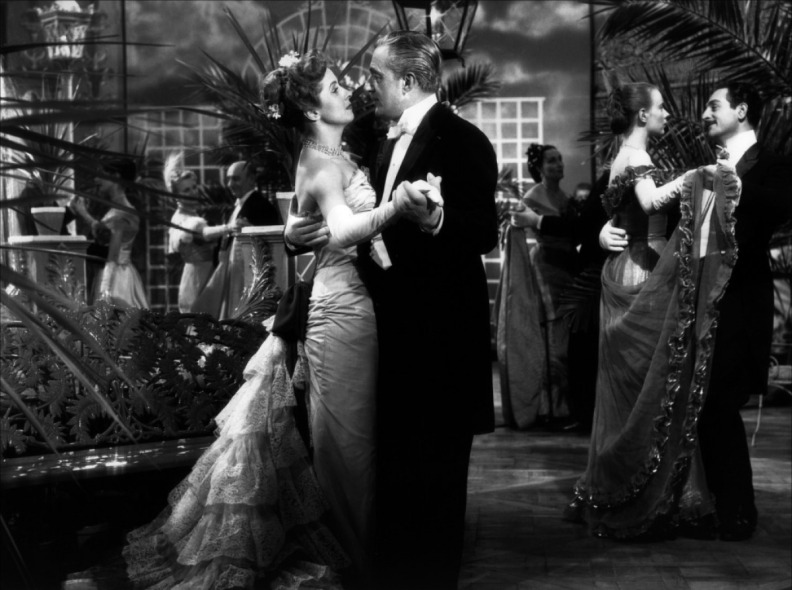 Despite being shown in wonderful visuals, I do not think the film has a wonderful view of its characters. In the opening frame we see just a pair of earrings owned by the films main character “Louise de…” (anonymously named) the camera then pulls back to show her surrounded by not only material objects but an extremely privileged lifestyle. The film almost never lets us overlook the relevance of the wealthy world these characters are submersed in. Louise lives in a world with countless servants on call, with elegant and precise preparation before public gatherings and with not a lot to do other than be married and look beautiful for other wealthy people. Other than her home and the pawnshop, Louise is not required to travel anywhere. (outside of very bourgeois styled visits to church and the opera)

Louise’s conception of her earrings in this film is a very important element. Her husband  sees them as a sign of love for his wife, meaning that by giving them away he feels his love has been rejected by her. However it is also suggested by the film that the earrings are a sign of ownership he has over his wife, a sign of aristocratic power he has over her and others due to his wealth. In a way the earrings are short terms for all the material objects Louise is surrounded by. This life may be a well-off one, but is there much humanity and meaning under the surface? Is there any love in this characters world? This is why eventually in the film she attempts to find something more.

The film is not only rich in social commentary with a strong passionate message under its surface, but is wonderful and romantic to look at. Its motions in camera movement will leave you wanting more from Ophüls. His style is something you will see attempted all over cinema, but when it comes to using it to its best possibility, Ophüls was really the only person that could make them like no other.

Have you seen “Madame de” or have thoughts on the post/top 100 film series? Your comments are always welcome here at “A World Of Film.” Also, if you are interested in writing for us, send a message and an example of your writing to aworldoffilm@outlook.com