A neglected young boy in Paris is sent to reform school for petty thievery. 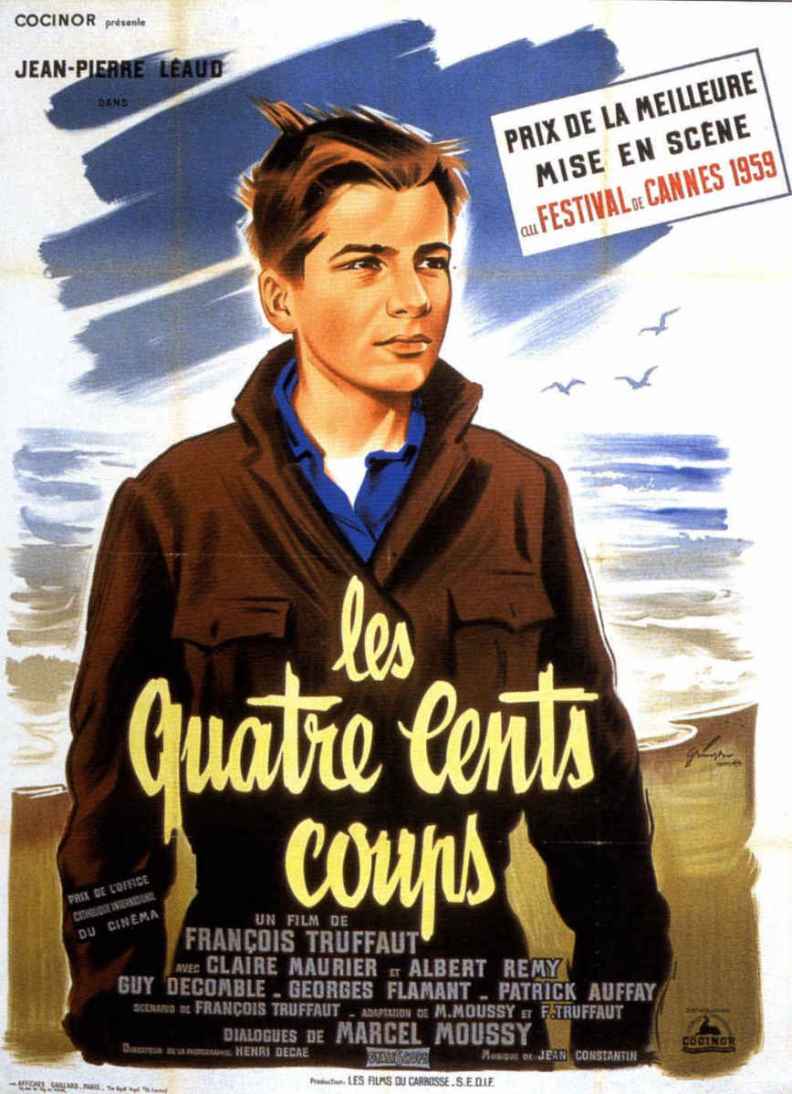 It has one of the most famous endings in film history, the hero running to the shore and turning back to face the camera, which then freezes the moment, leaving him in an eternal moment of doubt and hope, caught between a mean, neglected existence and a dream of escape. When Francois Truffaut made ‘Les Quatre Cents Coups’ in 1959, he mined his own unhappy childhood to make a breathtaking, stunning, heartbreaking debut.

It opens with a romantic score and shots of Paris, always with the Eiffel Tower looming in the distance. Gradually we get closer and close to the tower, finally driving right by it and then away. It doesn’t reappear in the film, and I think the most famous landmark in Paris is there in the beginning to symbolise a Parisian life that will be denied its hero, Antoine Doinel (Jean-Pierre Leaud). For although Antoine lives an exciting life in the city, Truffaut’s Paris is not the elegant city of light. There are no ‘tourist shots’, and though there is beauty, the city is bustling mostly with weary citizens. This may be France on the brink of the nineteen-sixties, but much of it looks as it had done for decades, and the film doesn’t shy from mean apartments and dirty back-alleys. The last that Antoine will see of the city is through the bars of a police van as he is taken away.

The Doinels live in an apartment that is so cramped that Antoine makes his bed up in the tiny hall, and having done so, has to step over it to get out the door. His parents seem unsure what to do with him. His father is more interested in rally cars than anything else, and his mother can only find fault with him. He will then discover her on the streets with a lover.

Antoine is picked on by just about everyone. His teacher has contempt for him. His classmates misbehave, but Antoine is the one who always gets caught. The classroom scenes will prove almost painful to watch for some, as they will surely bring back memories of school best forgotten: rote-learning, bullies, crawlers, tedium.

Antoine and his friend skip school to go to the cinema, play pinball and visit an amusement arcade. He needs an excuse: he tells his teacher that his mother has died. When that backfires, he decides he has to run away. He gets involved in petty thievery (milk, a typewriter); reform school seems a very cruel punishment. Jean-Pierre Leaud was 15. He would play Antoine Doinel again in several more of Truffaut’s films.

One of the great things about the film for me is how fresh it is after all these years, and how funny parts of it are. It stands as a wonderful evocation of childhood, and I think ‘The Loneliness of the Long-Distance Runner’ owes something to it. Truffaut dedicated the film to Andre Bazin, the film-critic and his mentor at Cahiers du Cinema, the man who helped the French New Wave get going. It still feels like a film on the brink of something.  In Britain in the same year, Tony Richardson made ‘Look Back in Anger’; between that and Truffaut’s debut, fans of serious cinema must have had hope. The big Hollywood film of the same year was the turgid ‘Ben Hur’.

Have you seen The 400 Blows? What did you think? Please tell us your thoughts here at A World Of Film. Also, if you are interested in writing for us, send a message and an example of your writing to aworldoffilm@outlook.com