It is impossible to think of the British comic 2000 AD without thinking of its most famous character, the fascist cop Judge Dredd. Part Dirty Harry, part Nazi stormtrooper, Dredd and his fellow judges from the Hall of Justice enforce the Law in the post-apocalyptic megalopolis Mega-City One. Dredd is judge, jury and executioner in a city that resembles a war zone. The character has been brought to the big screen twice; first, in an abysmally misconceived piece of camp nonsense starring Sylvester Stallone; second, in a massively enjoyable and properly violent film starring Karl Urban. Everyone wanted to forget the Stallone film; in contrast, there is a campaign to make a sequel to Urban’s film.

The Stallone version is rightly best forgotten. At first, he seemed like a good choice for the part: he had the required jawline and a growly delivery of lines that would suit the role. However, fans were appalled at the look of the film (too bright, too colourful, too cartoonish) and utterly gobsmacked when Stallone removed his helmet. At no point in the history of the comic has Dredd ever taken off his helmet. The character is deliberately faceless: he is the personification of the police state. 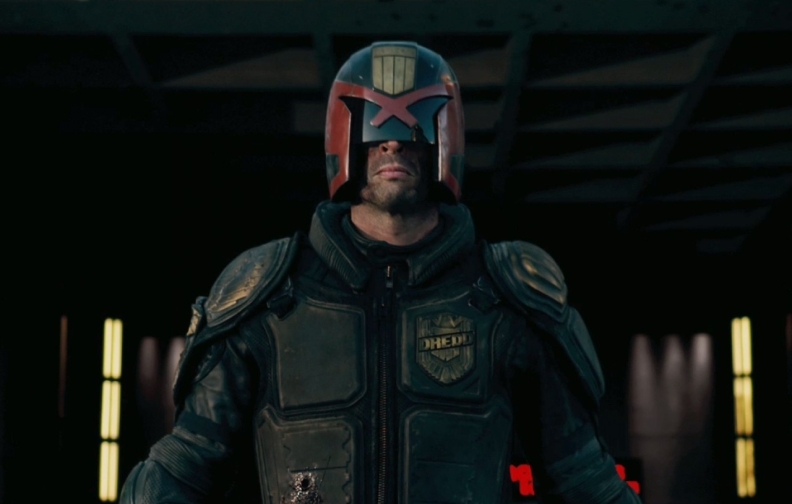 I actually can’t remember that much about the film. There was something about Dredd having an evil twin brother (or clone, or something), and at some point Max Von Sydow popped up to collect a pay-cheque. What I remember most is that Rob Schneider was in it for comic relief. You know a film is forgettable when the standout performance is by Rob Schneider.

The more recent version is fantastic, gory fun. Karl Urban (the best thing about the new Star Trek films, in my opinion) looks and sounds like you expect Dredd should. It takes talent and charisma to hold the screen when the audience can only ever see your mouth an chin, and Urban has it by the bucket-load. His jaw is permanently clenched, he has the Eastwood growl, and most importantly, he never takes off the helmet. I got the chills when he scratchily whispered “I am the Law”. And I am not even a fan of the comic.

A decent hero, of course, needs a decent villain. Ma Ma (Lena Headey) may be one of the most vicious gangsters to come along in a while. Fans of Game of Thrones know she can play a manipulative bitch, so it shouldn`t be a surprise to see her as a cold-blooded druglord (druglady?) With an ugly scar across her face, cropped dark hair and eyes that could pierce concrete, Ma Ma rules Peach Trees, the 200-storey slum tower block where she manufactures Slo-Mo, a drug that slows the mind, making everything feel as if it’s moving at one percent of normal speed. The filmmakers used a digital Phantom camera (which can shoot at 4000 frames per second) to achieve the effect of super slow-motion.

Dredd is a curious amalgam of buddy cop movie and western (it has elements of High Noon and 3:10 to Yuma). Dredd has been saddled with a rookie partner, Anderson (Olivia Thirlby). One in five rookies get killed on their first day. His boss tells him to throw her in at the deep end. “It’s all a deep end,” he grimly replies. There are 17,000 crimes a day, and the judges can only respond to 6%. Dredd and Anderson find themselves pinned down in the tower block while the Ma Ma Clan hunt them down, and the terrified residents refuse to help. Anderson, though, is a psychic (her first name is Cassandra).

Many comic book movies these days take themselves way too seriously, are bloated and far too long – cough, Man of Steel, cough – but Dredd moves briskly and is barely over 90 minutes. Dredd is not for the kiddies, and it more than earns its rating. It is very violent and gory. People get skinnedand tossed off a balcony, or shredded to pieces by bullets. Blood splatters everywhere. Much of the carnage is filmed in super slow motion. Sam Peckinpah would have liked the Phantom camera very much.

Although it wasn’t a huge box-office success, fans of the comic liked it a lot. I suspect that Dredd was satisfying to fans because the talent behind the camera is British, and perhaps therefore more attuned to the comic`s ethos than the Hollywood version. The cynical screenplay is by novelist Alex Garland (The Beach, 28 Days Later). The director is Pete Travis. It was filmed in Cape Town and Johannesburg, cities that have a lot of concrete brutalist architecture which is perfect for a dystopian view of the future. If it has a flaw, it’s that we don’t really get a sense of the world outside Peach Trees – if we’re lucky and they make a sequel, hopefully we’ll get to see it then.

Judgement: Four Slow-motion Bullets in the Face out of Five