I was living in Korea when I first saw Seven (or Se7en, as it is sometimes pretentiously stylised). The print was dark so I couldn’t make out very much, and the sound in the cinema was appalling. I could barely hear the dialogue over the noise of incessant rain. My initial thought was that the film was interesting, and obviously had some clever notions behind it, but not much more. I watched it on video a year later and appreciated it far more. It was far longer than I remembered; as well as showing dark and scratchy prints, Korean cinemas had the annoying habit of bluntly chopping off arbitrary scenes from movies to reduce the running time, so when I got to see the film in full, I could watch all that I had missed.

I have since seen it several times, and just recently I watched the beautifully restored blu-ray, which allows you to see how well-lit and artfully composed each frame is. This is a film dealing with a horrific subject, but it’s hard not to be in awe of the craft with which it was put together, even when some of that craft is grisly make-up and gore.

The screenplay is by Andrew Kevin Walker, and it may be one of the most jaded scripts ever written. The subject is sin; Walker thinks we’re all guilty and bereft of hope, and wants to shove our noses in the dirt to prove it. He also wrote the very dark 8MM: perhaps the guy needs to spend some time in the sun. It’s worth pondering if Seven would be made the same way today. It seems very much of its time; it has a fin-de-siecle feel of something depraved created at a time of decadence; an exquisitely detailed, lavishly mounted morality play.

The film has only a few light moments: when the passing subway rattles the apartment, and Freeman, Pitt and Paltrow laugh uncontrollably; when Pitt uses Cliff Notes to Dante; and when Pitt pronounces de Sade as “de Sha-day”. But they are few and far between; this is a dark, dark film. 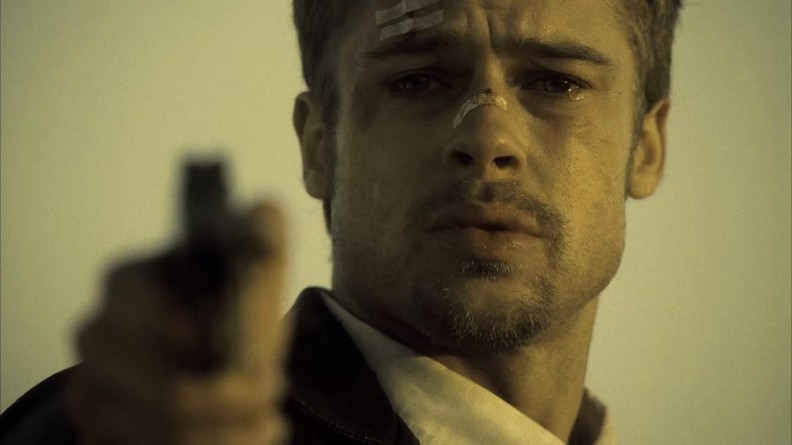 It rains almost throughout the film until the last day when the sun comes out, which is deceptive on the part of the film as it still has a downbeat ending, an ending that director David Fincher and the cast fought the studio to keep. Morgan Freeman offers a little – just a little – consolation when he tells his boss that he’ll be around, and then quotes Hemingway at us. I think the quote feels tacked on and unnecessary. Still, though, this is one of Freeman’s better performances. He’s old, weary, he’s seen it all, and he moves slowly, not just because he’s a careful cop, but because the city has worn him down.

As for Pitt, this is perhaps his best early work. He’s punchy, angry, boyish, cocky. The relationship between him and Freeman is well-written and well-played; it breathes life into a stock situation (old wise cop & young aggressive rookie). Paltrow also is very good. It’s easy to mock her these days – the conscious uncoupling, the air of privilege, some rather silly statements about the world – and forget that she was once a young actress with enormous talent. She’s only in a couple of scenes, but she holds the screen like few actresses can. She and Pitt were dating at the time, and the chemistry is obvious.

And then there’s Kevin Spacey. Spacey had done psychotic before (on the TV series Wiseguy), but by the time Seven came along, we’d had a raft of smart serial killers (thanks to Silence of the Lambs). How does an actor distinguish himself in a part that could have been cartoonish? Spacey opted for a still, quiet performance, delivering his verdict on the world in the back of the police car. That scene still holds up as one of the best written, best acted scenes in a Hollywood movie from the last twenty years. The amazingly tense scene that follows is edited brilliantly.

All that said, though, I`m still not sure if this is a film with which I can fully engage. I can admire it tremendously, of course, and I do. But there`s something curiously alienating about it, in spite of Pitt`s energy, Paltrow`s warmth, and Freeman`s wisdom. In a similar way, I’m in awe of Picasso, but I don’t know that I like his paintings very much. 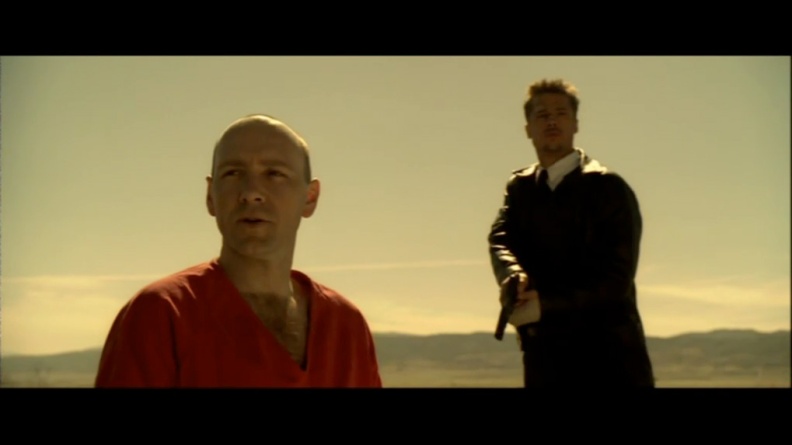 Is it because of the sickly greenish hue that saturates most of the film? Is it the endless rain? Or the unbelievably depressing score? The filmmakers would probably have you believe it’s a tough film to watch because you may see yourself reflected in one of the seven sins being punished. There’s something very dubious – or perhaps very clever – about a film that, in spite of beautiful music by Bach, Charlie Parker, Thelonius Monk, and Billie Holiday on the soundtrack, makes you want to take a long shower afterwards.