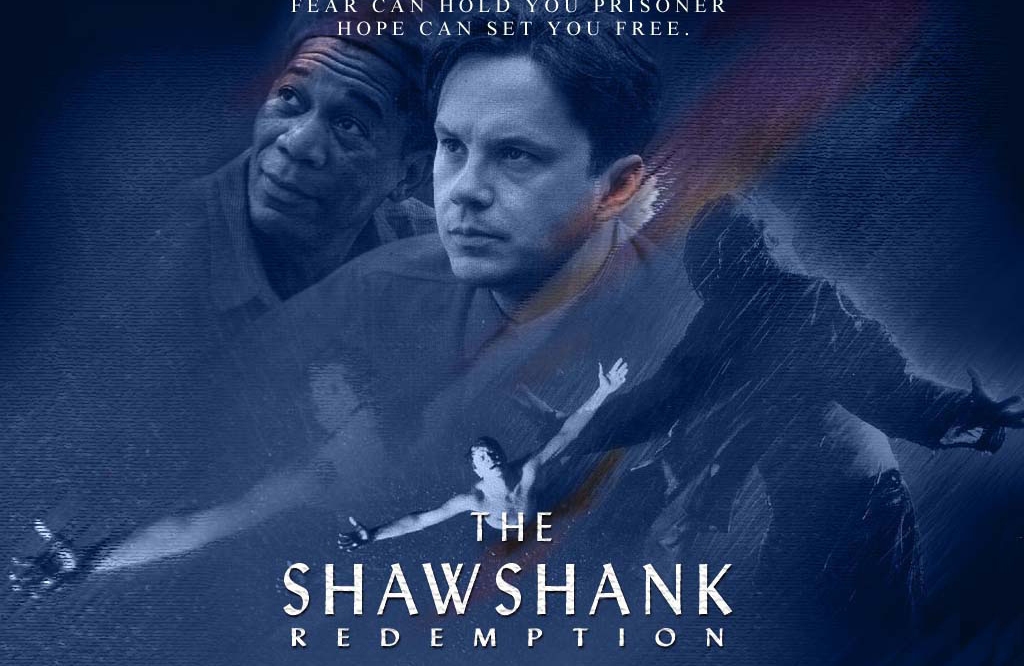 Massive Spoilers for the three people on the planet who haven`t seen it.

“Get busy living, or get busy dying.”

It’s fitting that The Shawshank Redemption was made for Warner Bros. The studio pretty much invented the prison picture, and Warner pen epics like Twenty Thousand Years in Sing Sing, San Quentin, and Each Dawn I Die were staples in the 1930s and 1940s.

Based on a novella by Stephen King, Rita Hayworth and the Shawshank Redemption (well worth a read; perhaps one of the better things King has written), writer-director Frank Darabont crafted a screenplay that hits all the expected sentimental beats of melodrama, and has a voiceover (usually a terrible thing), yet is so well-written as to be near perfect. At times the film skirts close to mawkishness, and there are moments when life in prison almost looks appealing and fun (the banter sounds like what you’d hear among buck privates in an old army picture), and it’s unbelievably manipulative (especially with regards to Brooks), but, Jesus, what a payoff at the end.

The film contains nearly every prison cliche: bribes, brutal guards, a cruel warden, rape, the old and respected trustee, dumb felons, cowardly felons, beatings, murder, and an escape. The only thing missing is a riot. It covers twenty years in almost two and a half hours- Darabont marks the passing of time by Red’s parole hearings and by three iconic posters on Andy’s wall. I can’t think how it would be better if it was shorter because there isn’t a scene I would want to see cut (except possibly the opera scene: more on that later.) And for a film set in a brutal prison, it has a beautiful, elegiac score by Thomas Newman.

It’s twenty-five minutes into the film before Andy and Red have a conversation. To keep your two protagonists apart that long is unusual, and yet those first twenty-five minutes are crucial to establish the setting and the characters. Casablanca spends a similar chunk of time setting the scene before Ilsa walks in to Rick`s cafe.

One important part of the screenplay, though, requires a great leap of faith on our part. How Andy manages to escape is best not scrutinised: you simply have to accept that he serves 19 years in the same “one bunk Hilton”, which is conveniently located at one end of the block, and that in all that time he is never transferred or assigned a cellmate, so that he can chip away at the wall behind Rita Hayworth, then Marilyn Monroe, then Raquel Welch.

I don’t think King or Darabont chose those posters arbitrarily. Of course, they’re fantasy females in an all-male environment (all three represent a cheesecake sexuality that appeals to teenaged boys, and prison invariably reduces men to adolescent concerns: fucking, fighting, getting high), but they are also unattainable movie stars, as far removed from the audience as they are from the prisoners in Shawshank. So the guys wolf-whistle and howl and cheer when Rita Hayworth throws her hair back in Gilda because that’s what’s expected of blue-collar guys (and cons). It’s as if Darabont is saying ‘hey, they’re guys just like us.’

They even look like us: with the exception of Robbins and Freeman, the rest of the cast is made up of ordinary-looking character actors and day players. There is no Oscar for Casting. Why not? Pick the wrong face and the tone is ruined. Darabont and his Casting Director, Deborah Aquila, chose well. In fact, some of the faces wouldn’t look out of place alongside George Raft or Paul Muni. This is a movie as much about other prison movies as it is about prison.

Of course, they all stand still and quiet when the aria rises above them in what has to be the film`s most condescending scene. See how all these murderous hicks are transfixed – and `made free`- by High Culture. Red says, “To this day I have no idea what those two Italian ladies were singing about. Truth is, I don`t want to know. Some things are best left unsaid. I like to think they were singing about something so beautiful it can`t be expressed in words and makes your heart ache because of it. I tell you those voices soared higher it was like some beautiful bird flapped into our drab little cage and made those walls dissolve away, and for the briefest of moments every last man at Shawshank felt free.“

Andy, though, is different. He’s not one of the guys (at least, not at the start). He listens to opera (when a movie wants to show that characters are smart or sophisticated, they almost always listen to classical music.) He’s dignified, and it’s his nobility that gives him the strength to endure the rapes and the beatings and the cruelty of the warden. After all, he’s innocent, “for real innocent.” Everybody else is guilty as hell even if the standard line is “my lawyer fucked me”. In some ways Robbins is perfect: he can come across as aloof, and his blue button eyes give him a natural coldness, but he’s also an odd choice for the role. He’s a gifted dopey comic, and he has a good line in smooth villains, but this is the closest he’s ever come to the holier-than-thou character of Gregory Peck or Henry Fonda, and I can’t think of anything he’s done before or since in the same vein.

It’s hard to imagine now, but there was once a time when Morgan Freeman didn’t narrate almost every film he was in: this is the one that probably started him on the road to Voiceover Glory. Mind you, he does a fine job, his voice smooth as honey but filled with sadness and regret, and his narration is taken almost word for word from the book. There is an intimacy in Freeman’s delivery that lets you think you’re sitting beside Red at a bar as he’s telling you about his old friend Andy.

The film was well-received by critics but failed to find an audience in its first run. Debate still rages as to why: was it really because people were confused about the title? Or is that just an urban legend? Tim Robbins says he still has people congratulate him for The Scrimshaw Rebellion. In any event, over time word of mouth helped earn it its much revered status (no. 1 at imdb, for whatever that’s worth). I haven’t met anybody who doesn’t have warm feelings for it. Empire Magazine summed it up well when it described the film as “a bloke`s weepie`. Indeed, you’d have to be a pretty cold-hearted bastard not to fight back tears when Old Brooks struggles with freedom after 50 years inside and decides it’s Lights Out.