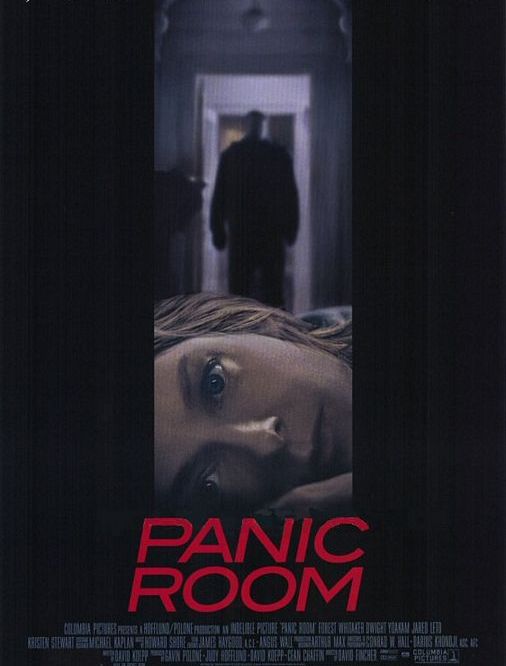 Originally Posted at betweenframes.net. Come check out other reviews written by Mikhail Karadimov

Panic Room has long been derided as one of Fincher’s lesser films. Maybe people had trouble accepting Fincher’s supposedly lame shift in subject matter—from the visceral, “in your face” bombast of Fight Club, to the restrained, small-scale follow-up of Panic Room—or maybe they just weren’t eager to watch a movie about money-hungry thugs breaking into an Upper West Side brownstone so soon after 9/11. This film isn’t shy about reveling in its own New York-ness.

The entire credit sequence is dedicated to looming aerials of the city hushed with solemnity. Even the score hums with a grave, insidious tone. The city has lost something. The buildings loom like mourners at a funeral. The unthinkable has occurred: their security’s been breached, and now they stand like puffed-up sentinels, as brave as their mettle will allow. 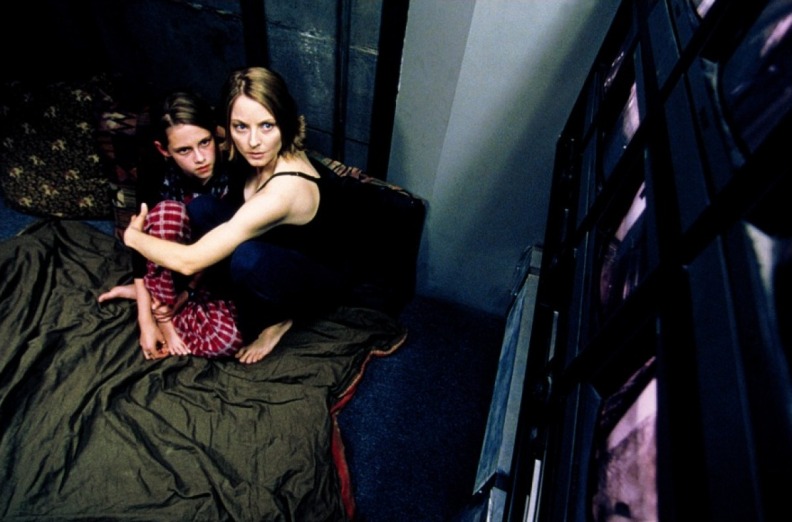 Ravaged by what seems to have been a brutal divorce, Meg (Jodie Foster) moves her and her daughter Sarah (Kristen Stewart) into a swanky brownstone meant to recreate the suburban lifestyle they had in Connecticut. The house is glaringly large with high ceilings, three floors, an elevator, and a state-of-the-art panic room for keeping pesky home intruders at bay—because, as you know: mo’ money, mo’ problems. Alas, the panic room proves it’s worth as a trio of amateur dolts break into Meg and Sarah’s home to claim the former owner’s—now dead—hidden treasures, something like 30-million dollars.

Most of the film’s entertainment comes from these Three Stooges of crime, Burnham, Junior, and Raoul. They’re an eclectic bunch, while remaining severely inept. The three of them trundle through the movie like a vaudevillian act of slapstick. They’re the sinker. They’re the characters that keep the audience engaged. They’re funny, sad, scary, pathetic, and alien. One of them, mysteriously named Raoul, wears a ski mask and carries around a silenced pistol. He lurks like a shadow, always ready to jump onboard with the quickest and messiest of plans. A few mortal deaths mean nothing to him if it means coaxing Meg and Sarah out of the panic room, where the money’s hidden. 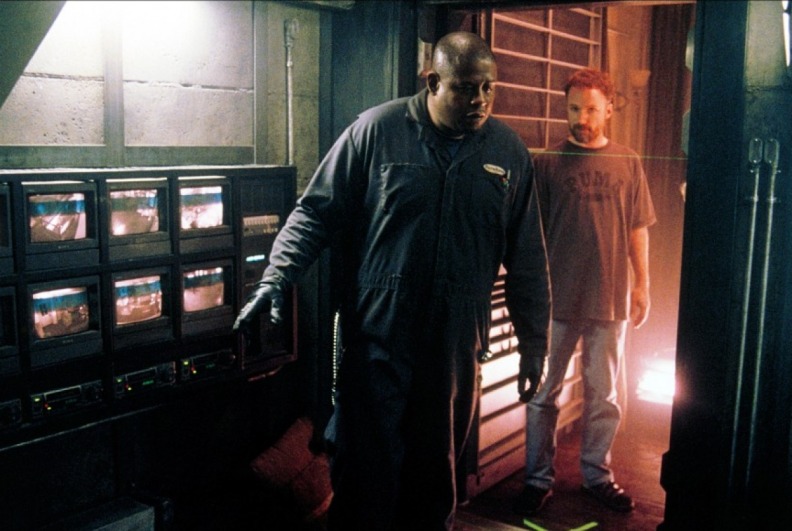 Even when Burnham ingeniously connects a little tank of propane to the panic room’s ventilation to force Meg and Sarah out, Raoul rips the tank away from him and cranks the dial-up to a lethal dose. Burnham has to then remind him: “We can’t get into the room if they’re dead!” Doesn’t matter. Raoul keeps the dial where it’s at. What’s most unnerving—in a cosmically comical sort of way—about Raoul, is the face that lies hidden beneath the mask. Later in the movie, up comes the mask and there’s Dwight Yoakam (Sling Blade, Wedding Crashers). It’s not the face we expected. It’s not a monster, not some specter of death, but instead: it’s the moon-faced, curly-haired, balding country singer, Dwight Yoakam. Goes to show: evil comes in many weird shapes. Still, the other two stooges are just as grotesque: Burnham with his lazy eye and Junior with his ill-informed cornrows. These aren’t smart guys. Like Colonel Kurtz, what makes them so interchangeably frightening and funny is the lack of method to their madness.

Sure, they can slip-up and blunder and lose a couple of fingers and then squirm and cry like a child that’s scraped his knee ever-so slightly, but then they can turn that quiver and whine into a bang and shoot one of their own right in the back of the head. It’s the perpetual intimation of lightening-in-a-bottle violence that causes the audience to hold their breath and claw their seats. It’s a gut punch when we see Raoul, so silly in his over-the-top penchant for menace and masks—at one point Burnham calls him Zorro—turn around and aim the gun on one of his own for the sake of self-preservation.

As is typical of any Fincher film, the technical proficiency on display here is as titanic as ever. Rarely do I see better special effects than the ones I see in a Fincher film. People like to point at the screen and clap and coo about the spectacle of any and all superhero films, Cameron films, Gravity, but it’s films like Panic Room and Social Network that really fool this spectator’s eye. They actually make me wonder whether what I’m watching is the product of a series of zeroes and ones or a mélange of other techniques—lighting, sound, composition—coming together so succinctly in post. Fincher’s a director that respects himself enough to double back and wipe away his tracks. He erases all trace of effort.

Unaware of the stooges’ presence in her home, Meg wakes up in the middle of the night for a trip to the bathroom. Back in bed, and sleepy from all the wine she tanked earlier in the evening for her bathtub cry, Meg notices the light on in the panic room and goes to shut it off. Set in the wall beside the door glows a panel of video feeds coming in from the security cameras installed all around the house. Meg glimpses a flash of movement on one of the monitors. It’s the stooges. You can practically feel Meg’s ass tighten.

What’s interesting about the scene is the moment Meg finally decides to act. It’s not a sudden decision. There’s no adaptability to it, no strive for survival. Meg’s immediate reaction is to stand still. She stuns herself paralyzed as she watches the stooges figuring out their next move. Meg can’t believe what she sees: packed into a tiny six-by-six square of glass, so fuzzy and dark, so voyeuristically separate from her, is a scene not possible in her WASP-y world.

B&Es don’t happen to people like Meg and Sarah Altman. The worst thing that can possibly happen to them is a broken home. It’s not until one of the stooges—as they’re apt to do—bumbles and accidentally kicks a basketball across the room, that Meg finally connects what’s happening downstairs with what she sees on the screen; it’s the sound of the ball smacking hardwood floor that springs her inner mamma lioness into action. It’s reminiscent of the memories I have of how people stared in awe, with their limbs frozen, mouths agape, minds reeling from the impossibility of what’s happened, at the constant loop of that now iconic image of Flight 175 crashing into the South Tower. In the days after 9/11, the image played without sound over and over again, to the point where people were struggling to distinguish reality from fantasy from TV.

Thanks to television and its time-tested reputation for desensitization, we could distance ourselves from the situation as far as we wanted, as Meg distances herself from the real horrors going on below. She can make the situation as real as she wants—or at least until the basketball cracks through her world like a rumble of thunder. Then she moves. She sprints for her baby upstairs and drags her all the way back down to the panic room.

Fincher and Hitchcock have a lot in common. Both are obsessed with the air-tight control afforded by pre-production. Most of their work is done then and there with extremely precise storyboards that detail every last move, every angle, every beat and every action. They operate like gods, tightly designing their productions with preordained outcomes. Once a sequence or scene is locked down in pre-production there’s very little wiggle room for improvisation, which is ironic given Panic Room’s “plan gone wrong” conceit. Given their mutual exuberance for calculated precision, it’s surprising how long it took Fincher to homage the Master of Suspense so directly.

There’s a lot of Rear Window in here. From the claustrophobic, telephoto, point-of-view shots of a next door neighbor’s window, to the over-the-top, Golden Era Hollywood pitter-patter of two snippy real estate brokers from the film’s first scene. Both Rear Window’s and Panic Room’s protagonists are trapped and paralyzed by their own undoings—of course Rear Window’s L.B. Jeffries’s immobility is more literal than Meg’s. Meg is stuck in the past. She’s latched onto a time when her family was one whole unit. That’s why she buys the huge house for her and her daughter: to help ease them into the transition of city life without Sarah’s father.

It’s all about security. About protection, and then over-protection. As the real estate broker mentions in the first scene, the panic room is the latest and most innovative advancement in home security. Of course it is: everyone’s scared shitless of Red Alert. When whipped good and hard—and unexpectedly—sometimes our natural reaction is to drop into the fetal position and shut out all externalities, as many of us did post-9/11. After the towers dropped, we all eventually flocked to our self-cultivated internet bubbles. We shoved as much of our lives into our phones, playlists, and social media networks—all these barriers to human contact—and hid inside of these supposed “realities” as a means to create a divide between the happy and the sad. 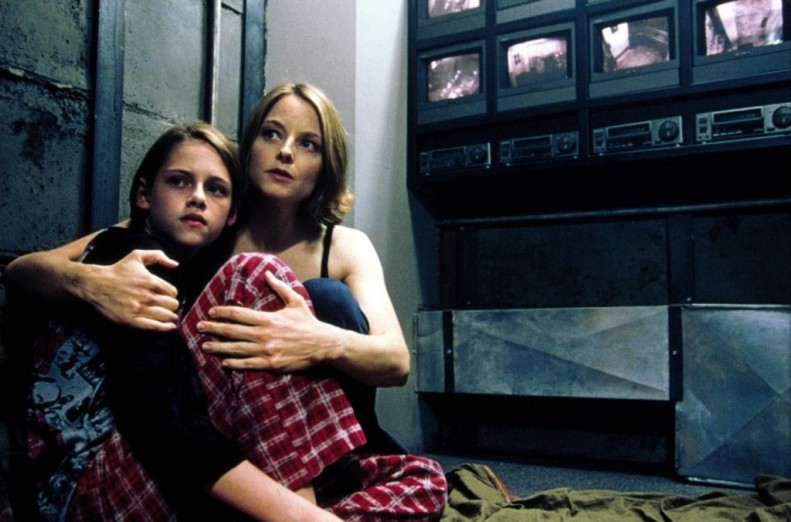 Look up anyone’s facebook page and all you see are people at bars, holding up their drinks in “cheers,” sidling up to the opposite sex, snapping selfies, reporting in quick and quippy status updates anything and everything that happens to them of positive worth. Like Meg does whenever referencing the security feed, we’ve cocooned ourselves in our own personal panic rooms, peeking out at the world through pictures and updates, links to web articles, blog, and videos. With such a turbulent world sitting just outside our windows, why shouldn’t we create panic rooms for ourselves where we get to dictate and manicure our realities however we see fit? Because—as Meg demonstrates—there’s no survival in stasis. You have to bust out and reinvent, to adapt and persevere—even if it means smashing in a thief’s face with a sledgehammer. In the span of some 120-minutes, Meg goes from shattered housewife to crafty guerilla warrior.

In the film’s coda, instead of reuniting the family through some kind of “trial by fire” machination—since Meg’s ex-husband eventually arrives to try to straighten matters out, only to be wrecked and tortured every which way—Fincher cranes away from an image of mother and daughter out in the world again, cozy on a park bench, resilient as ever, flipping through the paper’s apartment listings. These women don’t need a patriarch, especially not one so brutalized and impotent as Steven. They’ll survive on their own just fine.

If you are interested in writing for us, please send a message and an example of your writing to aworldoffilm@outlook.com

For those interested in becoming a sponsor of us, please visit our “sponsors” page, found in the top menu. This is also where you can find our “donate” page, any donations are hugely appreciated, and help us keep going, thank you.